There are several areas on the island that can only be built during a quest. The only exception being Northern Glade Castle which can be built to unlock a discovery quest. 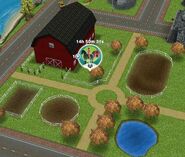 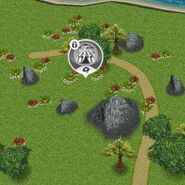 Icon for the High Top Carnival 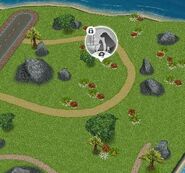 Icon for the Barkshire Pet Park

The Mysterious Island has more resident lots including seven Premium lots and four Houseboats. Each houseboat can only be unlocked and built when each monument levels up to level 5. The houseboats cost SPs. Two Premium lots are next to the Riches of Terra, four lots surround the Tempest of Bliss and one is next to the Volcano.

There are four element-based monuments that can be leveled up using resources that Sims find doing everyday tasks.

Some of these resources can be difficult to find, but there is no specific technique to finding certain resources besides completing as many tasks as possible.

After each action, a piece of material will appear above your Sim's head. These are resources used to build the monuments. When you find a certain amount of resources (for example: Riches of Terra requires 5 pickaxes, 5 gold and 5 granite to level up to level 5) a pop up will show saying you can now upgrade that monument to increase Simoleons, XP or the percentages of hobbies to level up faster. Once the Monuments are leveled up to level 25, they will activate the Volcano at the center of the island.

The Riches of Terra

Can be found near the Island bridge. X means the number of Simoleons will increase each time you level up the monument.

Description: Gives your Sims a chance to gain X bonus Simoleon generating actions, such as gardening, baking and working!

Near the Volcano. X means the amount of experience points gained from the following below and will increase each time you level up the monument.

Near the Bingo Hall. X means the percentage rate, so every time your Sims do an action the monument will decrease their motivation each time you level up the monument.

Description: Decreases the rate at which your Sims' motives drain by 'X'%.

Near the Flames of Wisdom. Unlocks at level 33. X means the amount of experience points and Simoleons gained.

Description: Increases the chance of getting XP and Simoleon bonuses from the 'The Riches of Terra' and 'Flames of Wisdom' by X%.

The Ancient Goddess can only be unlocked after you complete the main quest, The Pirate And His Goddess.

By trading resources that are otherwise used for the Monuments, some Simoleons, and Social Points to the Jolly Rabbit, you gain one of three gems: Emerald, ruby, and gold. Each time you level up the monument, you will gain a percentage boost to level up faster in hobbies. The monument can be leveled up to level 25.

Retrieved from "https://simsfreeplay.fandom.com/wiki/Mysterious_Island_(Location)?oldid=21196"
Community content is available under CC-BY-SA unless otherwise noted.